Prof. Dr. Piek Vossen gives the third lecture in the Paradiso series: Humanity 2.0 – The fusion of men and technology: the next step in evolution?

Piek Vossen’s lecture is titled: TO COMMUNICATE WITH AN IMPERFECT ROBOT. GET IT? 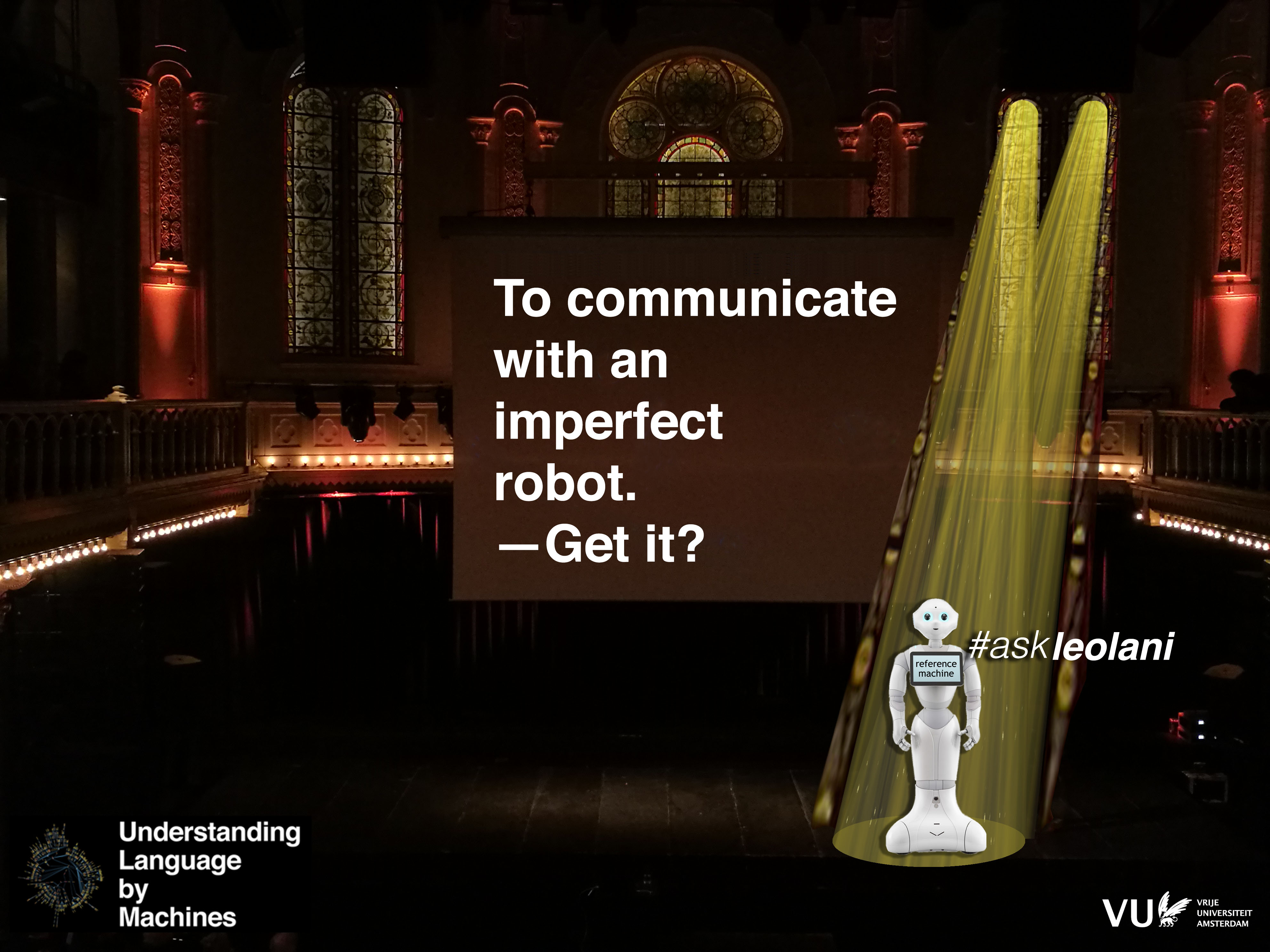 Meet Leolani: a robot with a “theory of mind” and a hunger for social contact.

So there you are. You try to explain your autonomous Tesla that this is an exceptional situation: you need to speed because your wife is in labor and you have to get her to the hospital as quickly as possible. Therefore you need to use the emergency lane and drive against the direction of traffic on the motorway. Big data and deep learning are not going to help you.

The lecture will be about imperfect, but autonomous machines and robots that will participate more and more in our society. They do not have fixed positions like a refrigerator or soda machine but move around, learn, try to be of service, meet other people, stand in the way or might get confused. Would you like such a robot at your bedside, or as a buddy teaching your child?

What to do with a robot that can’t figure it out? You help it, just like the robot tries to help you whenever it can. In a society in which autonomous robots and people live together, we also have to solve problems together. How do you help a robot? You are not going to “debug” it, but you talk to it. After all, solving problems is a matter of communication. Therefore the robot must not only speak computer language but also natural, human language, and that’s a huge challenge. Communicating with a robot is like communicating with an alien coming from another planet. Where to start? To what extent do we understand each other? What exactly is ‘understanding’?

By means of his robot Leolani Piek Vossen and his students show what a robot sees, hears, and thinks when it communicates with humans. Vossen opens up the world of a robot and shows the public how difficult communication is. For us, language is as natural as breathing, but for a robot it is a huge problem.

Leolani is a she and she has a hunger for social contact. She communicates with people but still has a lot to learn. She absorbs everything she hears and sees, but should she believe everything she’s told? How does she deal with the information she receives? How sure can she be about what she sees, hears and about what we tell her? Vossen tries to make robots that prepare for uncertainty and imperfection. The perfect machine does not exist and that is exactly why it is so important that we can communicate with machines and robots about each other’s defects.

Prof. Dr. P.Th.J.M. Piek Vossen is full professor Computational Lexicology at VU University Amsterdam, head of the Computational Lexicology & Terminology Lab (CLTL), co-founder and co-president of the Global WordNet Assocation (GWA), a member of the Koninklijke Nederlandse Akademie van Wetenschappen (KNAW) and a member of the Koninklijke Hollandsche Maatschappij der Wetenschappen (KHMW). In 2013 he won the prestigious Spinoza Award of the Netherlands Organisation for Scientific Research (NWO). Vossen conducts research on the understanding of language by machines whereby the concepts of identity (what are we talking about), reference (how do we name this), and perspective (why we do it like this) play a key role. In his latest projects NewsReader and Understanding Language by Machines machines learn to link language to the world.

For more information go to: www.vossen.info and the Facebook event.

Paradiso lectures are organised by Verstegen & Stigter cultural projects and Paradiso, with the support of NEMO Science Museum, the Royal Netherlands Academy of Arts and Sciences (KNAW), the Royal Holland Society of Sciences and Humanities (KHMW), and VPRO broadcast.